Eau Claire - the City of Bridges

Eau Claire, nestled in the rolling hills and valleys of the Chippewa Valley in Northwestern, WI, lies in a region known as the “Driftless Zone.”  This is an area of twisting rivers, deep gorges and large hills, which creates a setting for a beautiful Midwestern town.  Eau Claire’s downtown area forms along the confluence of the Eau Claire and Chippewa Rivers, which have been encased with parks and trails for recreational purposes.  Crossing these rivers are numerous bridges, many varying in age.  These bridges create strong connections in the community, carrying a rich history and incorporating it into a diverse future.  The entire region played host to a strong railroad economy, which led to the numerous railroad bridges in town, almost all of which still exist today. 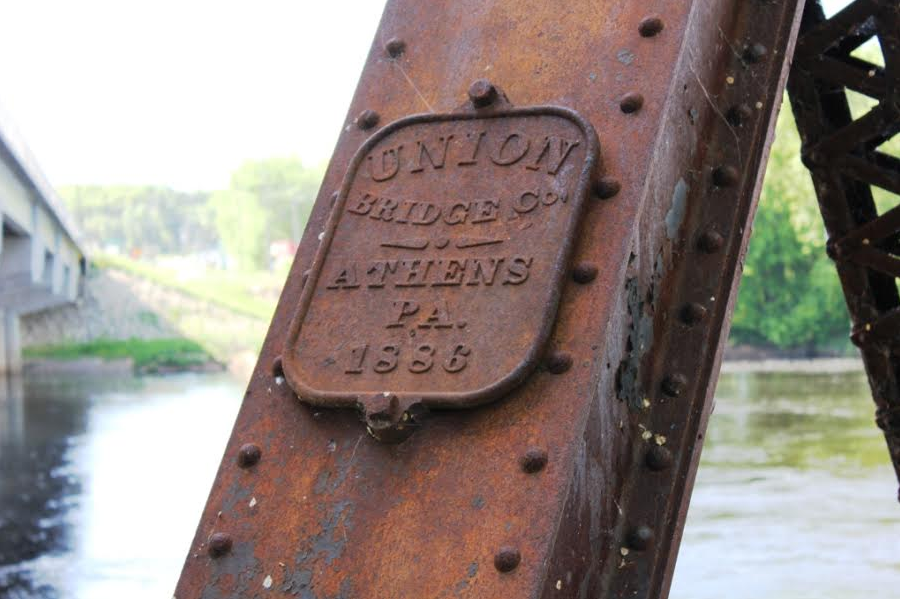 The first railroad to enter town was the Western Wisconsin Railway, which aimed to connect Eau Claire to the Twin Cities.  The railroad completed the line and a large wooden high bridge over the Chippewa River in 1870.  They also built another wooden structure over the Eau Claire River in Altoona.  This line eventually extended to Madison, via a connection at Camp Dodge.  From there, the line offered service towards Chicago.  The line became part of the Chicago, Minneapolis, St. Paul & Omaha Railway.  The Omaha Road rebuilt the line extensively in early 1880, by completing a pair of new bridges, one over the Chippewa and one over the Eau Claire.  The new bridges featured a lattice deck truss design, supported by stone piers and designed by Leighton Bridge & Iron Works, who completed many early railroad trusses for the C&NW (few of which exist today).  By 1882, the Omaha Road began to dissolve into the Chicago & Northwestern Railway, a major powerhouse in the Midwest.  In 1898, the Chippewa River High Bridge was strengthened, and new approaches were added by the Lassig Bridge & Iron Works Company of Chicago.  Lassig also completed an entirely new structure over the Eau Claire River.  These two structures received their permanent structural appearance in 1898. 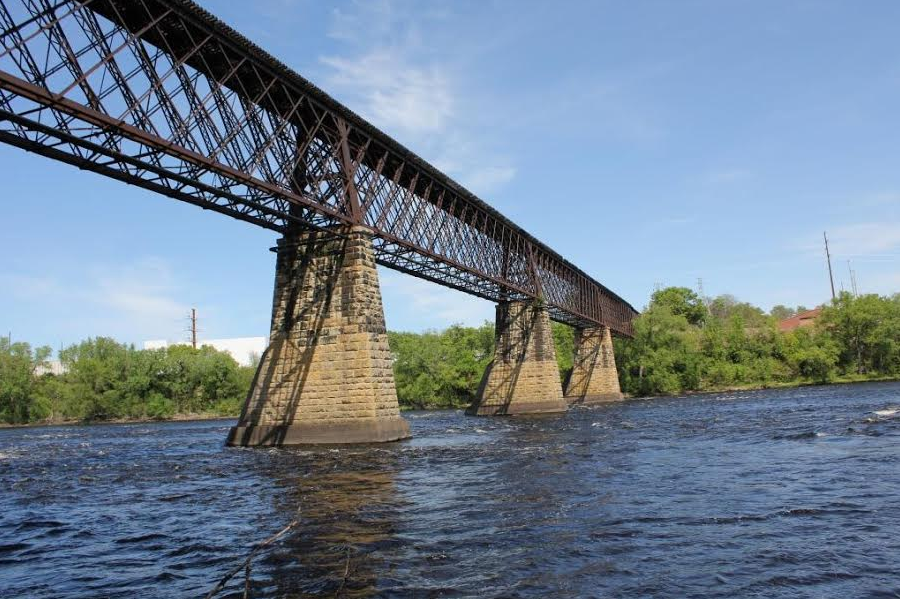 When the Chicago & Northwestern began to see a sharp increase in its traffic between Minneapolis and Chicago, this line was chosen to handle it.  The entire section from Wyeville (near Tomah) to Saint Paul was double tracked and rebuilt to a high capacity mainline standard.  At Wyeville, the line connected to another and this new line, also built between 1910 and 1912, was constructed to connect Sparta to Wyeville, and the three lines at Wyeville directly to Milwaukee.  The Milwaukee, Sparta & Northwestern lines were charted to construct the new mainline.  The overall intention was to bypass the inefficient routes through the bluffs, via Elroy, Sparta and La Crosse; and instead create a new connection which was more direct.  The impact on Eau Claire was simple - a new double tracked line was constructed to handle high speeds through the area.  The Eau Claire cutoff had left the existing line where the present day North Crossing intersects with Clairemont Avenue.  The line crossed the Chippewa River on a massive bridge north of the hydroelectric dam, and went through downtown Eau Claire.  Today, the line is owned by Union Pacific, who purchased the C&NW in 1995. 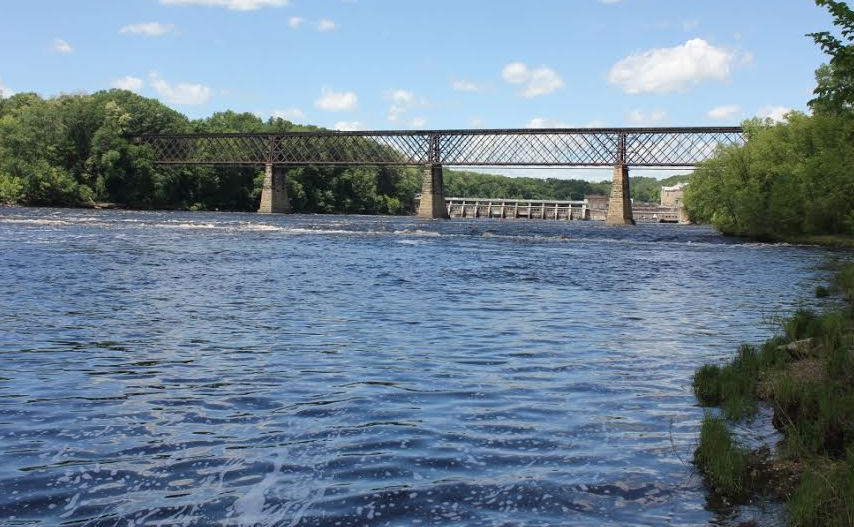 In 2014, the Chippewa River High Bridge still stands north of Madison Street.  Today, the bridge stands 82 feet above the Chippewa River, at a point just downstream from the hydroelectric dam.  The bridge features four 180 foot main spans, supported on massive stone piers.  The main spans are a type of bridge known as Quintuple Intersection Lattice Deck Truss, which means each member crosses each other five times.  Each end is approached by a simple 80 foot deck girder.  The final ten feet of the 890 foot long structure come at each end, when the long parapet style abutments (also made of stone) support the ends of the massive structure.  While the bridge was used by traffic until 1993, it was abandoned and later planned to be demolished.  Xcel Energy bought the structure and donated it to the City of Eau Claire in 2007.  It is planned to be converted to a trail bridge in late 2014. 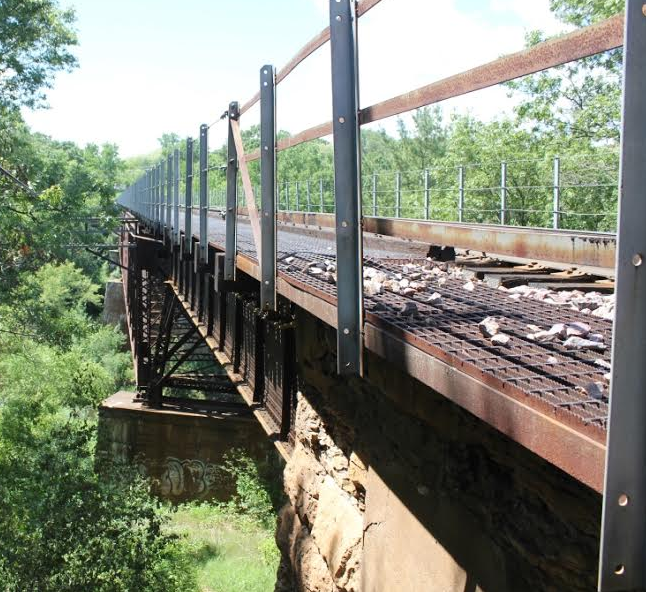 The Eau Claire River Bridge is a similar structure with a few unique qualities.  The two main spans are a pair of Double Intersection Warren Deck Trusses, commonly used by Chicago & Northwestern through the late 19th and early 20th Century.  The approaches are simple deck girder spans, of the same length as the high bridge.  From 1911 until 1991, the bridge was a Gauntlet Bridge.  This meant two pairs of rail shared the bridge, making for an inexpensive fix to a narrow crossing.  Although plans had been drawn up for a similar parallel bridge in 1916, it was deemed far too expensive and cut out from the annual budget.  Today, the bridge is much harder to access, and can be seen from River Prairie Drive.  The bridge can be accessed up close via the east end, at an Altoona Substation.

The mainline bridge today is much less visible than its predecessor downstream.  It is best seen from Old Wells Road.  It features four 182 foot double tracked pin connected Pratt Deck Truss spans on stone piers, with a single 80 foot deck girder approaching from the west, and two deck girders supported by a steel tower on the east side.  It was completed by American Bridge Company in August of 1912.  The bridge can be seen from a roadside park north of the railroad overpass. 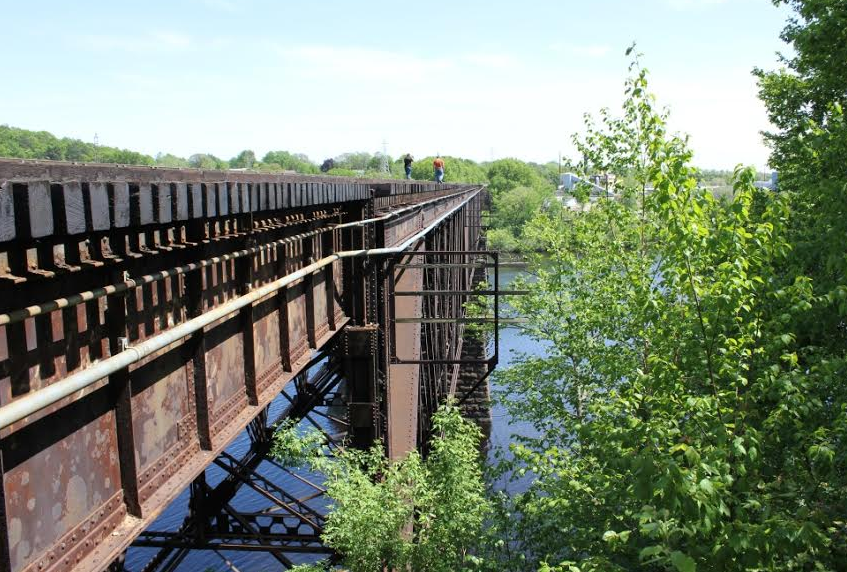 The second major railroad through Eau Claire came in 1882, when the Chippewa Falls & Superior Railroad built towards Chippewa Falls from Reeds Landing (in Minnesota), following the Chippewa River.  The railroad eventually became part of the Chicago, Milwaukee, Saint Paul & Pacific Railroad System.  The CMStP&P became an increasingly troubled railroad, eventually abandoning the entire line and selling it to a private organization, which was unable to turn a profit.  Today, much of it is the Chippewa River State Trail.

The Chippewa River State Trail crosses the Chippewa River twice.  The southern end bridge was built in 1886 by the Union Bridge Company, and is a four span pin connected Pratt Through Truss.  It is approached by a concrete slab span, and wooden trestle and is located under Clairemont Avenue.

The other is in Phoenix Park, right in the heart of Eau Claire.  It is a Whipple Through Truss with pin connections, with a pair of Pratt Through Trusses on the east end.  It was built in 1903, using a Whipple Truss likely relocated from Southern Wisconsin, from a line that was upgraded during that time. 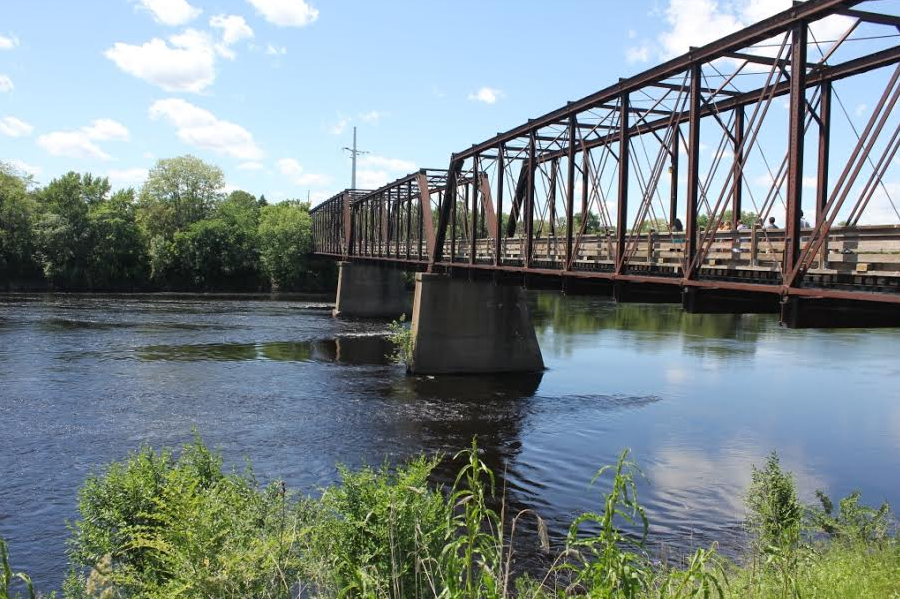 The final major railroad bridge in Eau Claire is the Soo Line S-Bridge.  It was built in 1910 by the Minneapolis Steel & Machinery Company to cross the Eau Claire River, using a standard Soo Line Warren Deck Truss design, with deck girder approaches.  The S Shape was necessary to connect to industry on the banks of the Eau Claire River.  It became a trail in the 2000s, and today is an Eau Claire landmark. 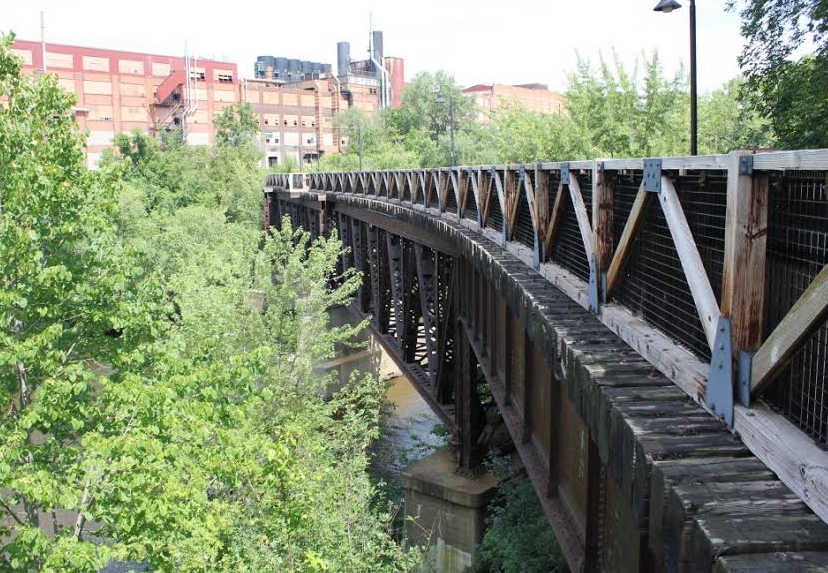 Each and every single one of the railroad bridges in Eau Claire had a monumental impact on shaping the future of the city.  The Northwestern High Bridge and the Union Pacific’s crossing of the Eau Claire River symbolized the growth of the railroad and how it launched Eau Claire into an industrial powerhouse.  Today, the Northwestern High Bridge remains as one of the most significant and historic railroad bridges in the Midwest, and will eventually become part of Eau Claire’s vast network of recreational trails.  The trails cross through and around Eau Claire, connecting people to places and things.

Both the Eau Claire and Chippewa Rivers have been preserved as natural resources to Eau Claire, which values them for their beauty. The crossing at Phoenix Park was wonderfully restored allowing visitors to imagine a time when picnic pavilions were loading docks, and the paths were made of iron and wood instead of concrete and asphalt.  The trail goes further to connect residential neighborhoods and Carson Park to downtown.  The S Bridge represents another major piece of engineering that Eau Claire has wisely preserved for future generations.  The trail it carries provides stunning views of the Eau Claire River, and connects East Side neighborhoods to downtown. 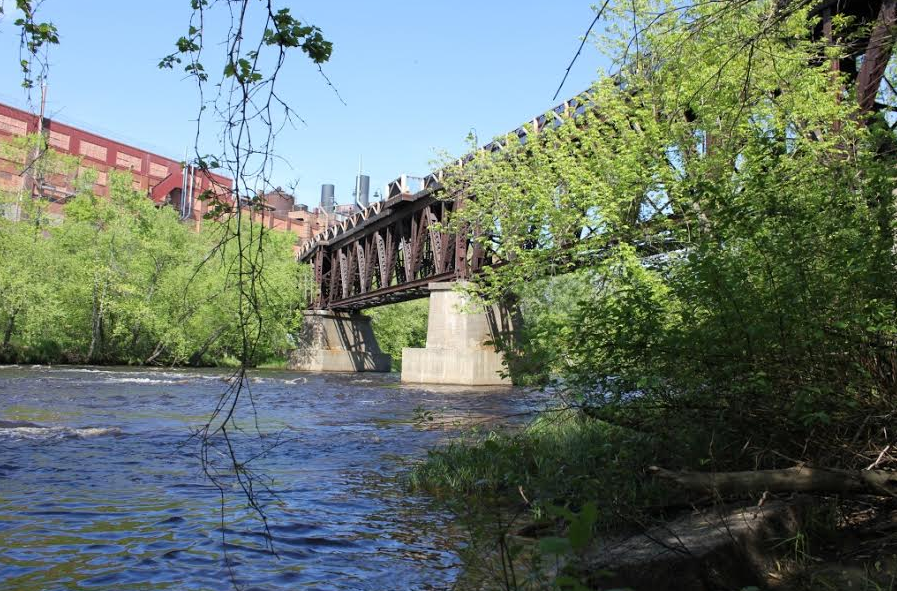 Perhaps the most major bridge in Eau Claire is the least visible.  The railroad bridge across the Chippewa River, which contains those four massive trusses was the turning point for transportation in Eau Claire.  Once the Chicago & Northwestern constructed that bridge, Eau Claire was immediately connected to the Twin Cities as well as Milwaukee.  The Twin Cities “400” ran through and made stops in Eau Claire, being able to make the trip between Chicago and Saint Paul in 400 Minutes, hours ahead of what the Amtrak can do today.  The rebuilding of the Chicago & Northwestern in 1912 left the biggest impact, as the C&NW had chosen Eau Claire to host its route, instead of easily bypassing the city.  Today, the line is the last active rail line in Eau Claire, other than what heads north towards Chippewa Falls.

One can define Eau Claire as a city of railroads, a city of bridges or a city of both.  The impact they left is noticeable today, and will be for generations to come, especially as the bridges and railroads have bright futures, including commuter rail, trails and preservation.  Eau Claire has an extremely rich heritage and history, which is strongly tied to its continued efforts to preserve the bridges and railroad features.  Overall, it has been a true success for the city and paves the way for continued success for the community. 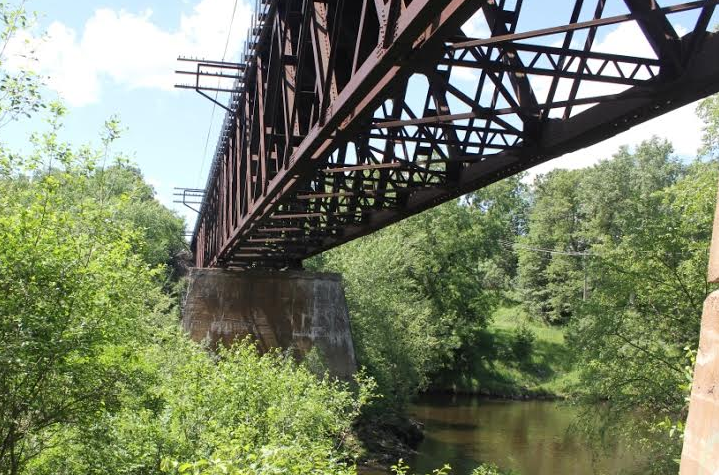 Bridges have been an interest as long as I can remember.  Even when I was a little kid, I marveled at the giant steel structures which would carry roads, railroads and pedestrian trails.  The interest really took off in 2009, when a bridge in Carver, Minnesota caught attention of the local media, as Union Pacific Railroad was pushing to abandoned the bridge, and the railroad it carried into my hometown of Chaska. When I took my first picture on a low resolution point and shoot, I was a mere 11 years old.

From there, the interest grew from a simple interest to a full on passion.  The passion of photographing and documenting historic (and sometimes non historic) railroad bridges slowly grew.  By November of 2010, John Marvig Railroad Bridge Photography became my organization name, and the first website featured about 15 bridges in the Twin Cities and near Grand Forks, North Dakota.  The original website was created in a middle school tech class, and launched publicly using a free host.  By the beginning of 2011, the idea of expansion outside of commonly traveled areas was created, and a higher resolution camera was used, along with a new knack for the history and design of each structure.

By the beginning of that summer, the photography reached Southwest Minnesota, and by the end of that summer, full on "bridge trips" were created and dedicated to the photography of one area.  As the trips became farther away, the history became the main passion, along with the preservation.  The bridges became larger, and my interest grew deeper.

By December 2011, I had expanded into Eau Claire, where the Northwestern High Bridge caught my attention.  In early 2012, expansion into Iowa was prominent.  Summer 2012 brought a major focus on the Eau Claire region, and the Des Moines region.  Upon reaching northwest Illinois and the Quad City region in December of 2012, the main website was reconstructed with a new domain name (johnmarvigbridges.org), a completely new scheme and design and more high quality photos.

2013 and 2014 solidified the notion that it was a passion, not a hobby.  Today, the photography has expanded to 94 counties in 5 states, and is a cornerstone of my goals of becoming a civil engineer.